Understanding the REAL FACTS on genital warts and HPV from someone who has actually dealt with the problem.

Here are some pictures of what genital warts commonly tend to look like on both males and females. Keep in mind that most pictures on the internet only show some of the worst and most extreme cases, but what I’ve tried to do here is gather for you a set of pictures that show both extremes; the mild and the very bad.

By the way, if you want the straight facts on genital warts and HPV that my main page does not cover, please click the following link: genital warts information. If you ever have any questions, feel free to contact me directly. I’m a pretty friendly guy and know what you’re going through.

This is a basic drawing of where genital warts tend to be and what they tend to look like. Below are more pictures and actual photographs:

Genital warts on the head of the penis

Genital warts around the head of the penis
These are more like the ones I had…to find out how to get rid of ones like these for good,
check out The Genital Warts Report

Genital warts on the side of the penis

Ones like these are best treated with method #2 in my report.

A genital wart on the penis
Again, method #2 would be best for this type because of its hard shell-like composition.

A cluster of genital warts on the side of the penis
Here are some more hard-shell types that method #2 works great on.

Scattered genital warts on the penis
Treatment method #1 in my report would be best for ones like these. 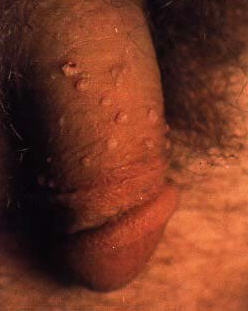 Notice how they tend to cluster up a lot. This is not always the case, but it happens a lot.

Always use method #2 on hard shell-like clusters if method #1 does not get any results
within about a week to a week and a half. The methods I’m referring to are
the genital warts treatments that can be found in my report. 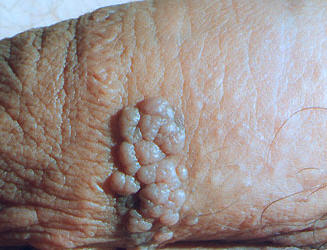 Here are also some pictures of vaginal warts:

45% of all people who get my report and use it successfully to get rid of their warts
are women. Sometimes it’s a little more difficult for women to treat their warts, but it
is still very possible, especially when most of them are on the outside

Ones like the genital warts below would be more difficult to treat on a woman, but
certainly not impossible. It would require a long treatment of method #1 in my report,
which is gentle enough, yet powerful enough to make a difference.

HOWEVER— If you are a guy and think you might have genital warts, do NOT confuse them with what are called pearly penile papules (see below) – penile papules are a rather normal thing for men in general (I’ve had a few myself ever since I was very young) – they are not harmful in any way and the only reason to care about them is if they are excessively large or long. The ones shown below in the photo are a little excessive, but not by very much.

ALSO— If you are a guy and think you might have genital warts, do NOT confuse them with what are called Fordyce spots (see picture below) – Fordyce spots are harmless and form on a lot of guys (I also have some of these myself, and have had them for a very long time) – so they are really nothing to worry about

Fordyce spots typically form in a pattern similar to the photo above – along the underside and side of the penis. A guy can not have them for many years and then all of a sudden wake up and have some. It happens very often to guys all over the world, except it’s not something most people talk about (for obvious reasons.) About 30% of guys will get fordyce spots in their lifetime.

This is a close-up view of fordyce spots along the shaft, often mistaken for genital warts

Another zoomed in view of fordyce spots on the penis. These are NOT genital warts

This is more rare, but fordyce spots can also form on the head of the penis – you might not like the look of them, but don’t worry – they are harmless and nothing is wrong with you for having them