Pretty much by total accident, some people have discovered that method #2 in my report also works on certain cases of molluscum contagiosum.

I wrote the report specifically based around how to get rid of genital warts. And that’s what most people get it for. However some people have written to me recently saying they mistook what they really had for warts, and in fact they actually had a condition called molluscum contagiosum all along.

Since warts and molluscum are somewhat related and a lot of people mistake them, I thought it would be helpful to do a write up on them.

Molluscum contagiosum looks like little round pimples, usually with hard waxy white cores. Trying to pop them usually results in bleeding and is not a good idea.

Like genital warts, molluscum contagiosum is a viral infection of the skin. MCV-1, MCV-2, MCV-3, and MCV-4 are the four types of virii that can produce moluscum bumps. MCV-1 is the most common and MCV-2 is the one seen in adults that is sexually transmitted. Moluscum can infect any part of the skin but the most common areas are the torso, arms and legs.

Also like genital warts, molluscum is highly contagious via direct skin to skin contact with the infected area. It’s contagious until the bumps are gone so getting rid of them FAST is the most important priority. Some researchers say they can go away on their own in a few months to 2 years, but who would want to wait that long for something that can spread like this?

The time from infection to the appearance of lesions ranges from 2 weeks to 6 months, with an average incubation period of 6 weeks.

Here are some molluscum contagiosum pictures and photos:

Notice how unusually round moluscum is

Notice the obvious hard center on the big one

Notice the waxy white cores on these 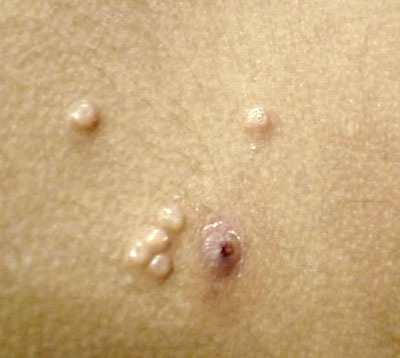 Again, notice the obvious hard center larger one surrounded by other smaller molluscum 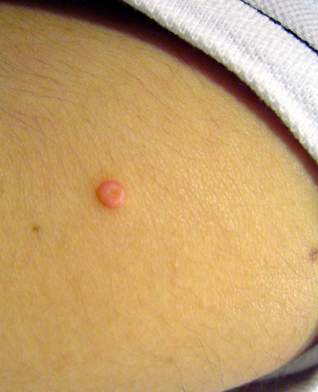 Anyway, hopefully now you’ve got a much better idea of the main differences in genital warts and molluscum contagiosum. I didn’t put photos of the warts on this page, because you can already see a lot of them on my genital warts pictures page.

In a future post I’ll write more about what people have e-mailed me when they accidentally discovered that method #2 in my report worked on certain cases of this condition.

77 Responses to Molluscum Contagiosum or Genital Warts? (Photos and pictures)