Fordyce Spots or Genital Warts? How To Tell The Difference

Fordyce spots (also called “sabaceous glands”) are often mistaken for genital warts by guys who wake up one morning and suddenly discover some little bumps on their penis that weren’t there before.

First of all, don’t freak out. A guy can not have fordyce spots for many years and then all of a sudden wake up and have some. It happens very often to guys all over the world, except it’s not something most people talk about (for obvious reasons.) About 30% of guys will get fordyce spots in their lifetime.

Every month, I get at least several emails from guys who have mistaken fordyce spots for genital warts and it’s really messing with their mind.

Usually all it takes are some simple picture comparisons with what you have to determine the facts. So below I’m going to post some fordyce spots pictures for men and also give you some guidelines for how fordyce spots behave.

Fordyce spots typically form in a pattern similar to the photo above – along the underside and side of the penis. 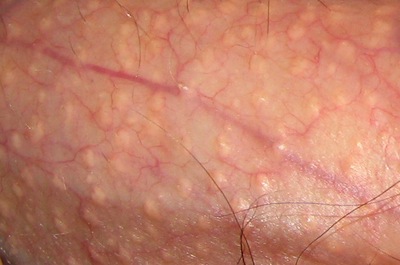 Although it is pretty rare, fordyce spots CAN form on the head of the penis.

Here are the general “rules” about fordyce spots that might help you narrow it down:

Having these things does not mean anything is wrong with you. It just means some glands under the skin have sortof “poked up” a little higher than usual, causing bumps to be visible on the skin.

Realizing what these things on you really are will take the stress and pressure off of thinking you have an STD when in fact this is really harmless. Bottom line is if you have a normal case of fordyce spots, just don’t worry about it.

120 Responses to Fordyce Spots or Genital Warts? How To Tell The Difference